Yesterday at 10:42 by AMS Kustom Dipz

Yesterday at 2:43 by The Apex Miata

Putting an idea out there to gage interest for a community event. It would either be a one night event on multiple tracks, or possibly a series. Here's the basics.

Spec series featuring a B or A class car (after upgrades)
NO tuning (i.e. sport suspension and trans, some engine mods to speed things up, etc. The only thing tuneable would be tires, so honor system on that.)
The car needs to be a reasonably balanced/well driving car to start with.
No TCS, no ABS, no ASM.

This should create some extremely close racing with minimal time investment. Winning should be entirely on who's the best driver, eliminating the variable of tuning from the equation. (We could call it, say... The Driver's Series?)

I like the idea of a sprint series, kind of like how Grid 1 worked (3 races at 3 tracks, 4-5 laps per race, points from each race would win "the event")

On the topic of "no tuning beyond tires", i like the theory but I dont know how well the honor system works when its a bunch of internet strangers... Maybe if there was a requirement that every driver had to share their tune? That way if someone is suspicious, you just grab their tune while in the lobby.

Overall my opinion is "the more options available for race nights/events, the better" so I'd be interested if it was in a day/time that worked for me. 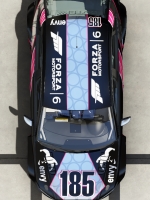 I think you have posted this in the wrong section, that or the September update had more stuff in it that I thought

CQR Myles wrote:I think you have posted this in the wrong section, that or the September update had more stuff in it that I thought

I'm just trying to gage interest, figured general discussion was a good place to engage the whole community before I go as far as drawing up a TCR application and whatnot.

Whooooops! Wrong forum hahaha. Can a moderator move this sucker for me? *inserts foot into mouth*