Trans Am Rules and Regulations

Trans Am Rules and Regulations 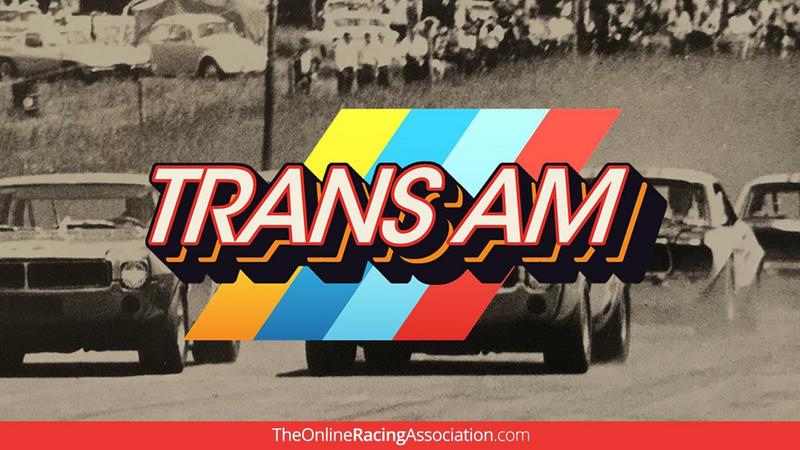 Welcome to the 2018 Trans Am Series. This series will be contested on Forza Motorsport 7 on X Box One from September 13, 2017 to October 25, 2018
Before you decide to enter, please take the time to read the rules & regulations very carefully.

This will be a championship fought by each driver for themselves. The total amount of points at the end of the series, minus the lowest scoring round from their overall points will be their final points total and will result in their position in the overall drivers standing at the end of the year.

A team will be made up of a minimum of 2, and maximum of 3 drivers. Each team driver MUST compete in a different car. "Differences" include year and/or model. Example a 1969 Camaro SS and a 1970 Camaro Z/28 are considered "different" cars. This championship will be scored by the total points scored by the top two team drivers at  each round over the course of the championship. There will be no Drop Round for Teams' Championship.

The substitute driver can not come from an existing team. A substitute driver may only score points for the team they are driving for in any particular race, and must remain in a single car/team for an entire race meeting.

There will be ONE Car Change The Car Change window is between Round 3 and Round 4 of the Championship. Once you have signed up with your team you are 'locked-in' with your choice and current Driver line up,

1.1 Motor racing, as defined by TORA, is a non contact sport. It is understandable that on occasion some contact may occur as a consequence of incidents caused by either party; for instance "lag". At TORA lag is defined as sudden high internet latency or ping causing visual inconsistencies between players.

1.2 Competitors with lag issues will not be penalized, but will be asked to improve their connection for future participation in TORA’s events. If the issue is persistently hindering other competitor’s experiences, or you cannot join lobbies (see rule 14.0), please perform a speed test on your connection via http://www.speedtest.net/. Once you have completed this, see the connection section via this link:

1.3 TORA expects every competitor who partakes in our championships to behave in an appropriate and respectable manner. Insulting comments or behaviour towards fellow competitors, race stewards, lobby hosts and staff is unacceptable and will be dealt with severely by TORA Staff. Respectable on-track etiquette is expected of all competitors. This includes on-track battles, track limits, dirty driving etc.

This series has defined rules about liveries that drivers must adhere to in order to race in this series.  Failure to do so may result in a penalty or disqualification. The livery rules are defined in the Livery and Decal Rules thread linked here:
http://forums.theonlineracingassociation.com/t19353-trans-am-livery-specs

This series has a defined list of cars and build rules that drivers must adhere to in order to race in this series.  Failure to do so may result in a penalty or disqualification.  The car rules are defined in the Car List and Build Rules thread linked here:
http://forums.theonlineracingassociation.com/t19350-trans-am-car-list-and-build-specs

4.1 All drivers who register for this series MUST signed in for each round in the corresponding thread below. Drivers will receive ONE invite to the race lobby.
EU Series: http://forums.theonlineracingassociation.com/t19349-trans-am-eu-championship-sign-in-live-timing
US Series: http://forums.theonlineracingassociation.com/t19345-trans-am-us-championship-sign-in-live-timing

4.2 Registrations close TWO HOURS prior to each round. Drivers will not be permitted to race in that meeting if they attempt to Sign-In after this time.

4.3 The series organizer reserves the right to permit or deny specific drivers after the time stated in 4.2 depending on circumstances.

5.1 The race may be split into multiple lobbies, named A-Z, depending on the amount of drivers who have signed-in. Each lobby will be hosted by chosen members of the Marshals or Staff.

5.2 Marshals who have Signed-In to the race may be expected to host a lobby if no other hosts are available.

5.3 For each lobby, a specific Marshal or Staff member will be given "Lobby Marshal" status, whether or not they are hosting the lobby (if none of the aforementioned members are available, the lobby host will be given the status). They will be responsible for collecting times, race positions, reading the start grid and rules, and deciding whether or not a race restart is required.

5.4 The lobby settings must be abided by, and can be found here:
http://forums.theonlineracingassociation.com/t19354-trans-am-lobby-settings

6.1 The fastest clean lap time from a driver, as denoted by the game, will be recorded for qualification.

6.2 Qualifying sessions will consist of 6 laps total; 1 warm-up lap, 5 timed laps. Qualifying Session will be held promptly at the advertised race time on race day with races following as soon as possible.

6.3 The Lobby Marshal will input the times into the relevant document, or pass on the information to someone who can.

7.2: Competitors will perform a single Warm Up Lap, maintaining their grid position (Set by Lobby Host via MANUAL Grid Order), before a rolling start on lap 2 begins race conditions. We ask all competitors to listen to the lobby host for what speed they should drive on the parade lap - 80 MPH maximum. We ask that competitors do not race one-another in the formation lap as to not interfere with the grid order, any resulting infringements will be reported to the race director and penalties may be given. Maintain a single file formation at 80 MPH to the final corner, at which time you pair up into double file formation and slow to 60 MPH

7.3: Everyone forms up in their grid position via rows of two, at the designated area (per in lobby pre-race instructions) at the designated pace lap speed for that circuit (per in lobby pre race instructions)  then down to 60 MPH to the starting line. As YOUR ROW hits the start/finish line, you may commence racing. Jump starts will be investigated by the Stewards and will results in penalties.

If a driver accelerates before the Start Line, they will be penalized accordingly.

7.5 Decisions may be appealed if there is substantial proof (at least one more Replay other than the one used to make the decision) is provided to show the decision is incorrect.

7.6 Races will take place over a predetermined amount of laps. Please see the Season Calendar for details.

7.7 There will be two races in an evening, and each will last roughly 20-25 minutes.

There will be NO Mandatory Stops for the series, however pits may be used for repairs in needed.

There will be no designated ‘safety car’ vehicle utilized in our championships, due to the limited nature of online race lobbies. However, TORA does operate general safety car regulations which provide a similar outcome, utilizing the lead vehicle in the lobby to slow the cars to a safe speed whilst any obstruction is cleared from the circuit, or allowing affected competitors to repair any damage and catch up with the rest of the field.

The Safety Car will only be deployed if an incident or incidents occur between three or more competitors that severely impairs all competitors race. Only a driver involved in the incident may request the safety car, and make the request to the Lobby Captain. The Lobby Captain may seek the opinions of other competitors, before making the decision to activate the safety car period. The Safety Car may not be requested during the final two laps of a race.

In the event of a safety car period being called, the lead car takes the role of the Safety Car or Pace Car. The Safety Car must not exceed 60MPH and the pack must form in current race position in single file.

9.4 Warming of tires is permitted but must be undertaken in a safe manner with due consideration given to other competitors.

9.5 Competitors who leave the track by their own volition during the Safety Car period may be passed by the rest of the pack and the competitor will form at the back of the field.

9.6 Drivers not involved in the incident may pit during a Safety Car Period, but will resume the race at the back of the field.

9.7 If the grid has not formed by the time the pole sitter reaches the pit lane entrance, the safety car may continue for another lap. It is YOUR duty to ensure the safety of your fellow competitors.

9.8 RESTART PROCEDURE Everyone is expected to give a reasonable gap of 40 feet to the preceding car and maintain as steady a speed as possible heading to the starting line on restarts. DO NOT "lag back" to gain space in an attempt to jump the field. DO NOT restart closer than 40 feet from the car ahead of you. This way, the cars will all be grouped together nicely when the leader hits the starting line, which is when the race resumes. No passing before the Start Line.

Sometimes a meeting may have to be postponed. The meeting may be cancelled, or pushed back on the calendar. The entirety of this rule is at the discretion of the series organizer.