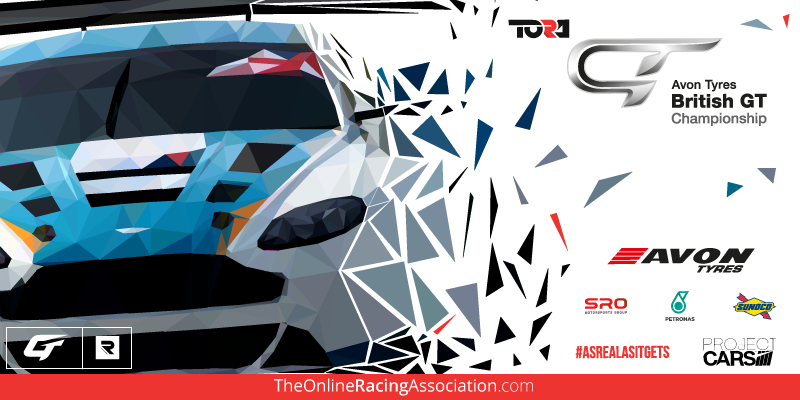 Welcome to the 2015 TORA Avon Tyres British GT Championship. This championship will be contested on the XBOX One version of Project CARS and will consist of 7 rounds including a media day.
Before you decide to enter the series, please take the time to read the rules & regulations very carefully:

Motor racing as defined by TORA, is a non contact sport. It is understandable that on occasion, some contact may occur as a consequence of incidents caused by either party, like lag for example. Competitors with lag issues won’t be penalized, but will be asked to improve their connection for future participation in TORA’s events. If the issue is persistently hindering other competitor’s experiences, please perform a speed test on your connection via http://www.speedtest.net/ Once you have completed this, see the connection section via the link below

This will be a championship fought by each driver for themselves. The points at the end of this series will be their final points total and will result in their position in either the GT3 or GT4 standings at the end of the series.There is ONE dropped round for this series.

To be eligible for competing in the privateers championship, drivers should only compete for themselves and not be part of a team. The points at the end of this series will be their final points total and will result in their position in either the GT3 or GT4 privateers standings at the end of the series. There is ONE dropped round for this series.

Each team will consist of a maximum of 2 drivers and the amount of points scored by each driver in all 7 rounds will count towards their team’s points total. There will be two individual championships for the GT3 & GT4 categories respectively.
The two drivers for each team will be sharing one vehicle for the 3rd round of the championship which will be the Silverstone 500. Please read the race rules below for more information.
There are NO dropped rounds for this series.

There are no substitute or team driver changes allowed in this series. Once a team of drivers has been registered, the team must stay with their original line up throughout the entirety of this championship.
However, for the Silverstone 500, if one of the teams regular drivers is not able to compete, teams are allowed a “super-sub” FOR THIS ROUND ONLY.
Privateer entries who do not wish to undertake the full race alone are also permitted to draft in a “super-sub” to assist.

DROPPED ROUND
Dropped rounds apply to drivers only. There are no dropped rounds for teams.
The dropped round will be the driver's lowest score. This does include 0pts as we appreciate on occasion, real life may not permit drivers to attend races.

Liveries are requested on a first come, first served basis.
Teams entrants must run the same livery for each driver entered by that team.

CAR SWAPS
Car choices are 'largely' fixed once the championship starts. (Round 1 - Oulton Park)
However, we appreciate that DLC additional content may provide extra content that some competitors may wish to take advantage of.
With this in mind, a 'transfer' window' will open between the Silverstone 500 05/07/15 and sign up closing for Spa on 18/07/15.
Car swaps will only be allowed for those wishing to make use of new DLC content. Swaps to pre-existing cars are not permitted.

Each TORA Avon Tyres British GT event will commence with qualifying
Due to the numbers expected in the series, qualifying sessions will take place on the Monday, Wednesday and Friday before a race meeting.
Each driver need only enter ONE qualifying session.This must be chosen as part of the race sign in process.
Each night will consist of two sessions. 1 x UK timezone session and 1 x US timezone session.
Qualifying sessions for each meeting will be 30 minutes in length
Drivers are able to enter and exit the pit lane freely during this time.
Qualifying data will be recorded at the conclusion of the session.

WEATHER SETTINGS
With regarding the weather settings, TORA will announce 24 hours prior to each race meeting what the forecast will be.
The data will be based on a forecast sourced for the real world venue from Accuweather.com

Qualifying for this race will take place on the Monday, Wednesday and Friday before race day and will last for 30 minutes.
Only 1 driver from each team will need to qualify. However, if both drivers decide to take part in the qualifying session, only the fastest time from 1 of the drivers will count towards their overall qualifying time.

Race meetings for this championship will consist of 6 rounds with 2x 30 minutes races and 1x 3 hour endurance. Please check the season calendar for confirmation.
Depending on the number of entries per meeting, each lobby will consist of a maximum of 14/16 cars which will be 7 or 8 cars from both categories (GT3 & GT4)

All of the races will commence with a rolling start which will include a formation lap.
START PROCEDURE:
- Drivers are called off the grid by lobby host in correct grid order.
- Drivers proceed around the circuit in single file. Tyre warming is permitted but brake testing is NOT.
- Towards the end of the lap, the lobby host will request drivers to form up in 2x2 formation. EXTREME CARE MUST BE TAKEN.
- The driver in last place must confirm to lobby host once all cars are in position.
- The rolling grid will then await the 3-2-1-GO call from the lead driver.
- This call will come only when the lead driver is about to cross the Start/Finish line.

*Due to some existing bugs Round 1 Oulton Park, will not have mandatory stops.

The third round of the championship will be 3 hours in length (approx 84 laps) which will be split into 2x races of 1.5 hours (42 laps) in length.
Drivers in a team will share ONE car and complete 1 stint each.
The car MUST be one of the two used by the drivers for the rest of the season.
Even though 'Subs' are not allowed for the rest of this championship, teams are allowed a “super-sub” FOR THIS ROUND ONLY.
Privateer entries will also be allowed to draft in a “super-sub” to assist if they wish.
**Please note that the Silverstone 500 will start at 7pm**

Dropped round added to rules.