Welcome to TORA TCF TASCAR Season 7. American Stock Car Racing has been a staple of TORA's racing calendar for many years and I am delighted to welcome you to the seventh year of competition for the main TASCAR Series.

I am also delighted to welcome http://thecheckeredflag.co.uk to the TASCAR Series. Having made their first appearance in eSports last year as a sponsor on the championship winning car, The Checkered Flag will now step up to sponsor the series itself.

The Checkered Flag is a UK-based Motorsport News site that covers international motorsport series of all kinds. From Formula One to Formula E, IndyCar to NASCAR, WEC to WRC and many more! With eSports continuing to grow in popularity, The Checkered Flag will join the fray by covering major eSports events in 2018, as well as providing race reports for every round of the TORA TCF TASCAR Season. 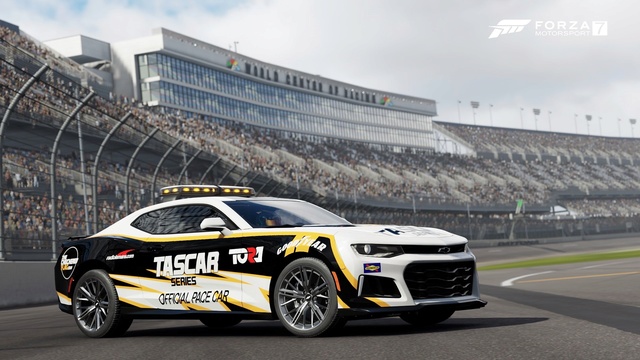 For 2018, the competing drivers will have to tackle the brutish power of the V8 American monsters with next to no driver assists such as traction control and anti-lock brakes. Drivers will be allowed to tune their cars, but the stock upgrades build must be adhered to. TORA TCF TASCAR Season 7 will also utilize recent improvements to Forza Motorsport 7 to run realistic oval race lengths. Oval race distances will match those of the real-world XFINITY Series, with the remaining road course races running for between an hour and an hour and a half in length.

The nine-round series will get underway at the traditional location of Daytona International Speedway. The season-opener will also comprise of the unique "Duel at Daytona" qualifying format that has proven popular amongst the drivers for the last few years. From there, drivers will head to Elkhart Lake for the first road course race of the year at Road America.

The third round of the series will see the drivers take to Homestead-Miami Speedway for the DeweyTee Memorial race before journeying to 'wine country' for the fourth round at Sonoma Raceway. The series will return to Daytona for the fifth round of the season which will take place under the floodlights.

One international race will feature on the TORA TCF TASCAR calendar for season 7. The drivers will journey across the Pacific Ocean to compete at the legendary Suzuka circuit for the 'TASCAR Thunder Special' on the East layout; the site of a NASCAR exhibition race during the 1990's. Another legendary location awaits them when they return Stateside for the seventh round of the season at Indianapolis Motor Speedway.

Registration for TORA TCF TASCAR Season 7 opens on Wednesday, January 10th. Be sure to check out the entire forum section for the series for further information on car builds, livery mandates and full schedule details.

You can read The Checkered Flag's release about the partnership here: https://www.thecheckeredflag.co.uk/2018/01/tcf-enter-world-esports-tora-partnership/