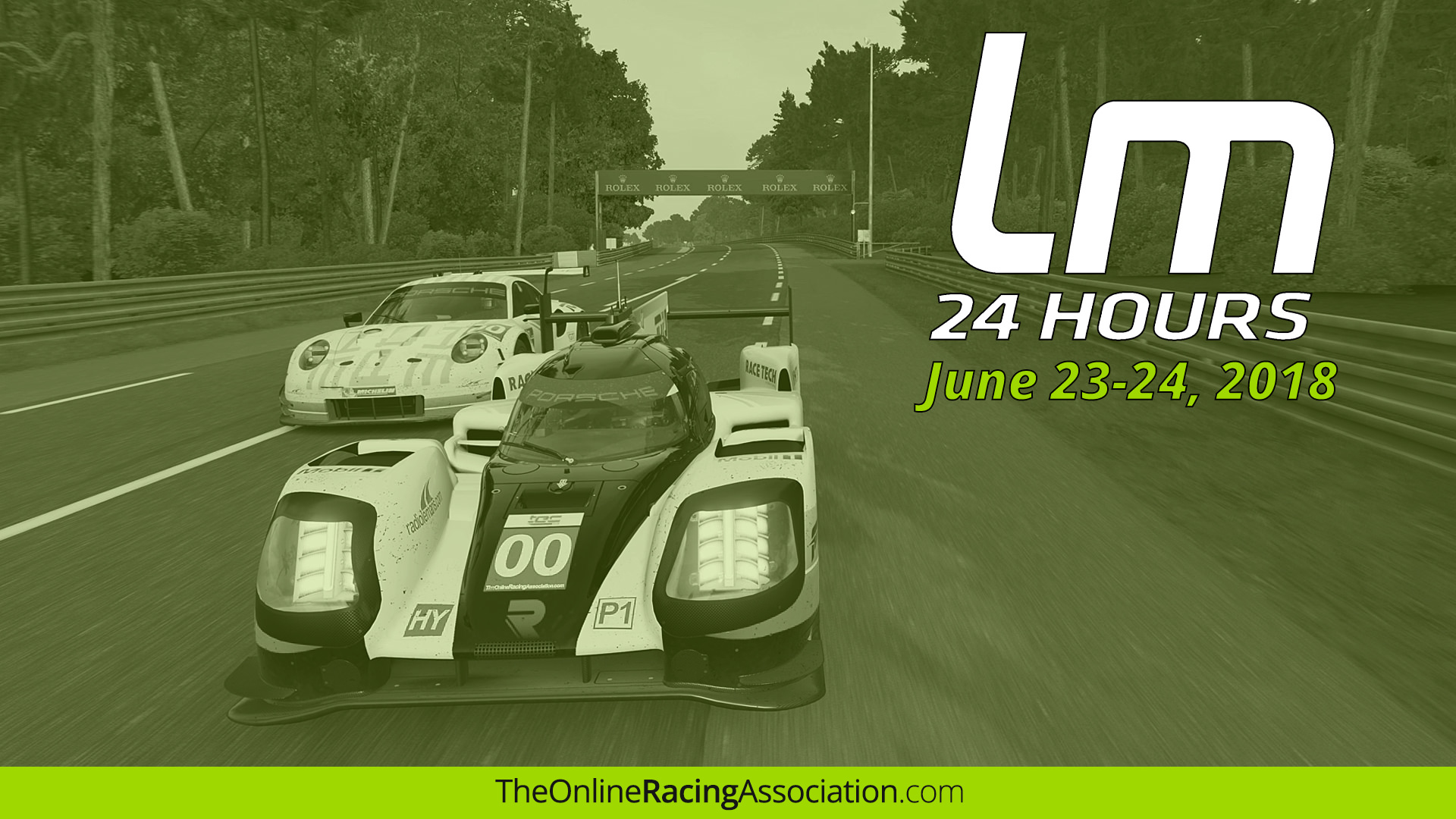 Welcome to the 2018 TORA 24 Hours of Le Mans. This race will take place on Forza Motorsports 7 on Xbox One and PC.

Before you decide to enter the series, please take the time to read the rules & regulations very carefully.

1.1 Motor racing, as defined by TORA, is a non-contact sport. It is understandable that on occasion some contact may occur as a consequence of incidents caused by either party; for instance "lag".  At TORA lag is defined as sudden high internet latency or ping causing visual inconsistencies between players.

1.2 Competitors with lag issues will not be penalized, but will be asked to improve their connection for future participation in TORA’s events. If the issue is persistently hindering other competitor’s experiences, or you cannot join lobbies (see rule 14.0), please perform a speed test on your connection via http://www.speedtest.net/. Once you have completed this, see the connection section via this link:

1.3 TORA expects every competitor who partakes in our championships to behave in an appropriate and respectable manner. Insulting comments or behavior towards fellow competitors, race stewards, lobby hosts and staff is unacceptable and will be dealt with severely by TORA Staff. Respectable on-track etiquette is expected of all competitors. This includes on-track battles, track limits, dirty driving etc.

2.1.1 This race will be made up of teams of up of a minimum of three and a maximum of five drivers.  Ideally teams will want the full five to make the races less challenging on yourselves and your consoles. Teams must drive in the same car throughout each stint of the race. If any team members switch into different cars throughout the race then their stint will not be counted in the team's overall distance and will be an instant stint DQ.
2.1.2 For simplicity, we are limiting the entries in each class for this race.  The P class will be limited to 24 entries, and the GT class will be limited to 30 entries.  This will make up 3 lobbies of 8 P's and 10 GT's.

This race has defined rules about liveries that drivers must adhere to in order to race.  Failure to do so may result in a penalty or disqualification. The livery rules are defined in the Livery and Decal Rules thread linked here:
http://forums.theonlineracingassociation.com/t19135-tora-24-hours-of-le-mans-livery-decal-rules#416849

This race has a defined list of cars and build rules that drivers must adhere to in order to race.  Failure to do so may result in a penalty or disqualification.  The car rules are defined in the Car List and Build Rules thread linked here:
http://forums.theonlineracingassociation.com/t19134-tora-24-hours-of-le-mans-car-list#416848

5.1 All teams who register for this race are automatically signed in for the race.  Drivers will be responsible for signing themselves in for qualifying secessions and filling out the stint form.

6.1 The race will be split into 3 lobbies, named A-C, depending on the qualifying results. Each lobby will be hosted by chosen members of the Marshals or Staff.

6.2 Marshals who have Signed-In to the race may be expected to host a lobby if no other hosts are available.

6.3 For each lobby, a specific Marshal or Staff member will be given "Lobby Marshal" status, whether or not they are hosting the lobby (if none of the aforementioned members are available, the lobby host will be given the status). They will be responsible for collecting times, race positions, reading the start grid and rules, and deciding whether or not a race restart is required.

6.4 The lobby settings must be abided by, and can be found here:
http://forums.theonlineracingassociation.com/t19138-tora-24-hours-of-le-mans-lobby-settings#416852

7.1 Qualifying for the TORA 24 Hours of Le Mans will take place during the week leading up to the race.  There will be lobbies hosted throughout the week to accommodate racers in European and American time zones (See qualifying thread for dates).

7.2 QUALFIYING PROCEDURE:
7.2.1 The qualifying secession will last 45 minutes.  The host will set up the lobby for one hour to provide time for data collection.  Drivers will have until 15 minutes left on the race timer to set their fastest clean lap.  If a driver is in the middle of a lap when time expires, they are allowed to finish the lap they are currently on before times are collected.
7.2.2 Drivers are not required use the entire 45 minutes to set a clean lap.  If a driver is pleased with their lap 5 minutes into a secession, they are welcomed to leave provided that the notify the host.  Drivers are also welcomed to pull off the track and take a break in the middle of qualifying if they so choose.
7.2.3 The pit lane will be opened the entirety of the qualifying secession.  Drivers are welcomed to pit whenever they will like.

8.1 The start of the race will be a ROLLING start, and will have different start procedures depending on the stint.

8.2 WARM UP LAP PROCEDURE:
8.3.1 The Lobby Marshal will read out the grid order in the pre-race lobby.
8.3.2 Drivers proceed around the circuit in single file. Tire warming is permitted but brake testing is NOT.


8.3 STINT 1 ROLLING START PROCEDURE:
8.3.1 Towards the end of the warm up lap, the lobby host will request drivers to form up in 2x2 formation, and continue at 80mph/129kph. EXTREME CARE MUST BE TAKEN.
8.3.2 The driver in last place must confirm to lobby host once all cars are in position.
8.3.3 The rolling grid will approach the Start/Finish line at 80mph/129kph in 2x2 formation.
8.3.4 Each row of 2 cars must try to maintain approximately 30ft/100m distance from the (pair of) cars ahead before they start racing.
8.3.5 The GT class must line up 300-400ft behind the last car in the DP Class.
8.3.6 As each row of 2 cars passes the Start/Finish line, they accelerate to race speed, and begin racing.

8.4 STINT 2-12 ROLLING START PROCEDURE:
8.4.1 For the remaining stints in each race, the starting produced will slightly change.
8.4.2 Instead of doing a full warm up lap, there will be a designated start point somewhere in the first sector of each track.  This start point will be the Dunlop Bridge.  Clarification for this will be posted in the Driver's Briefing.
8.4.3 Drivers will line up in single file and will not start until THEY pass the designated start point.
8.4.4 Leader in the GT class must still remain 300-400 ft behind the last car in the P class during the shorten warm up lap.

8.5 END OF STINT PROCEDURE:
8.5.1 While stint lobbies will be set to two hours, racing will actually last only 1 hour and 40 minutes to allow for a 20 minute stint turn around.
8.5.2 The stint will "end" with 20 minutes left on the race timer.  Once the race timer reads 20 minutes, drivers must come to a complete stop where they are on track.
8.5.3 The host will then take record the distance that the driver in overall 1st place traveled during the stint (in miles), everyone's distance to 1st Place (in feet), and then the distance between the cars in overall 1st place and 2nd place after 1st place has moved to the next mile marker. If the host is unable to hear 2nd place, they will fall back to 3rd place, or to anyone they can hear.  (If you have your distances in meters, we can convert it).
8.5.4 Once the host announces that they have collected all data drivers may then back out of the race / wait in the lobby.
8.5.5 Drivers that are double stinting will have their data collected first, provided that they are not in 1st or 2nd place, so they can make their next stint on time to reduce delays.

9.1 There will be a mandatory number of pit stops during the each stint. The exact number will be announced in the Driver's Briefing.
9.2 Drivers are permitted to pit at their own accord to refuel and change tires, or if they have damage to their car or wish to retire.
9.2.1 However, drivers are not permitted to pit during the last 10 minutes of the stint.  Once the race timer passes 30 minutes left, the pits are closed.

There are no safety cars for this series.


13.0 ENDURANCE RACING "LAGOUT RULE"
13.1 It is unfortunately not uncommon for races to be decided by a disconnection during a stint. As voted for last year, the majority of the community are in favor of a lagout rule to be implemented to reduce the amount of distance you lose should the worst happen.

13.1.1 The lag formula used will be as follows.  If you do lagout, at the end of the race the lobby host will check the pause screen and take note of the lap count currently showing. The lap you were on will be taken and entered into the doc along with DNF.  The number of laps will be then subtracted by 1 to get the total amount of laps completed (when you start the race this is on 1 but you haven't actually completed a lap yet).  This will then be multiplied by the track length to get your distance driven before lagging.  The distance driven will be subtracted from your team's lowest, non DNF stint mileage to calculate how far you could have driven after lagging out, and this will be multiplied by 0.75, and added to the distance driven.

So in simple terms, if you lagout you will given the distance driven, plus 75% of the potential mileage you missed out on by lagging.

13.2 To encourage teams to continue on with the race even after lagging out, a 70% Race Distance rule has been implemented.  In order for teams to receive the benefit of the lagout rule, they must complete at least 70% of the total race distance.  If teams do not complete 70% of the total race distance, then they will not receive any lagout credit.