Today at 4:05 by SFM Cowmaster

Yesterday at 11:38 by Koenigsegg R

Yesterday at 0:49 by SFM Darkzer

Yesterday at 0:08 by SGR Corvid

With the imminent release of Forza Motorsport 4, TORA will be in the same boat as everyone else with regards to leveling up, testing cars, earning money and understanding the game. We don't want to wait around until January to start racing again with the community, so upon the release of Forza 4 TORA will be running numerous Stock/Spec series. Each series will be weekly and will only run for four weeks maximum. The idea of this is to give all of us some time to adjust to the new game and enjoy racing something different until our regular series start up.

These Stock/Spec series will run with everyone in the same car either, you guessed it, completely stock and unaltered or built to a specific Spec to keep the racing close. As we do not want you guys to burn through your cash we will mainly be using cars that have either been gifted to people from Forza 3, gifted during Forza 4 gameplay or cheap cars that can be bought and upgraded with a reasonable price.

The nights will follow a similar format to our regular series. Sunday nights will consist of Stock/Spec racing that is based around high powered GT/Supercars/Sports cars/Prototypes. Tuesday nights will feature slower, more Touring/Road Car esque racing or something a little different.

To save some cash at the release of the game, we will also be using cars that can be gifted to you through your Forza 3 profile. This was detailed in Forza Motorsport 4: Under the Hood Part 2, where tables were released showing the rewards that you can earn through playing Forza 3. These tables are listed below, quoted from Turn 10;

What kind of car rewards are we talking about?

Based on your Forza 3 driver level, you start your Forza 4 garage with these cars. These are player loyalty awards. 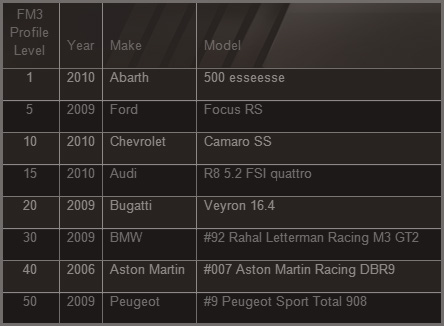 If you have any of the following cars in your Forza 3 profile's garage, you start your Forza 4 garage with Forza 4 versions of the same car. These are communiyt loyalty rewards.

As you can see, you can earn a number of cars from the get go just by linking your Forza 3 profile to Forza 4 and having the relavent cars in your garage.

With that in mind we will be kicking things off on Tuesday the 18th of October, a week after the US release and not long after the UK release, with Season 2 of the TORA Abarth Trophy. The cars will be built to a specific spec much like they were in Season 1 and will run for four consecutive weeks ending on the 8th of November. A week after the next TORA Stock/Spec series will then run for the next four weeks. Race format is yet to be decided, but expect to use the cars more than once during the night. Races will be held at 8pm BST.

Sunday the 23rd of October sees the next TORA Stock/Spec series commence, starting off with the Ferrari 458 Cup. The cars will be the standard model or Ferrari 458 found in the game and the cars will be completely stock and locked. This series will also run for four consecutive weeks ending on the 13th of November, and a week after the next Stock/Spec series will start up. As with the Sunday nights, race format is yet to be decided. Races will be held at 8pm BST.

To add a bit of variety to the TORA Stock/Spec series, we will not be choosing the series you will race in after the initial seasons. Instead, we will be leaving the choice up to the Community. At the mid point of each Stock/Spec series we will be putting up a vote for the next series, which will consist of three or four options. These choices can range from Peugeot 908s, V8 Supercars, SuperGT, DTM, Mazda Miatas, Hummers and just about anything else really. We will also be taking suggestiong from the community as to what could feature the the next choices.

This will also continue into 2012, with the TORA Stock/Spec series taking a permanent residence on a Thurday night. The series will be much longer, held over six to eight weeks, but the format will remain with the community picking the series of their choosing from the available options.

TORA will be hosting a night of racing on the Sunday the 16th of October on Forza Motorsport 4. This will not be a night of structured and points centric races, but rather a chance for all of us to get together and test out lobby options, lag and NAT issues and the 16 player lobby ability. During the night we will run anything and everything in a sort of 'Run what you Brung' mentality. Car will generally be 10 PI within each other and we will get to explore the new tracks available.

Thanks for reading and I can't wait to see what we end up racing before the year is out.

Tho sadly, i cant do Thursday's

yea up for this, evenings are good well at least til Nov 11 when skyrim hits my desk lol

will we be able to tinker with the tuninng, no upgrades tho on the stock races?

Spec Racing will be a set build and PI, but you will be allowed to to tune. Stock races will be locked upgrades and locked set-ups for road cars, but on the race cars tuning wwill be allowed. Although the way I see it, the stock series will mainly be road cars and spec series will be race cars. We'll just need to see what Forza 4 allows us to do.

It does, but it's a unicorn.

My guess is something UBER rare

Apaarenty it's the HKS evo

It looks not to dissimilar to a Brazilian Stock Car that Time Attack Evo... Hint Hint...

I believe the Time Attack Evo is already listed as a Unicorn...

...and some of them are DLC, so if you haven't got the pack - you aint gonna get the cars..

Trofeo Ferrari anyone?? 458 and/or 430 scuderia
http://www.ferrari.com/English/GT_Sport%20Cars/Sport-Prototypes/Pages/458_Challenge_Article.aspx

EZT Spartan wrote:...and some of them are DLC, so if you haven't got the pack - you aint gonna get the cars..

Hence no Scuderia or Leggera series

Is this forza3 DLC or new forza4 DLC? As I thought the scuderia was part of the VIP upgrade?

Other way round i think?

Lambo and scud were in the limited ed. pack. So may be dlc if you didn't get the pack with the game.

Yeah, it is a worry that the 458 somehow won't be available in the game without FM3 but I think that would be a bad move on T10s part. We need to see what the game offeres, but the 458 may not be the first car we use or we can make it a choice.

I'm sure it'll be there, but you'll just need to buy it if you don't have it in fm3. (300,000)
I just thought you were intending that the first couple of events would be low cost.
Still, we'll find out shortly :-)

The Superleggera and Scuderia were part of the VIP pack in fm3. In FM4 they will turn into unicorns, you can't buy them apart from the auction house. The Ferrari 458 will be available to purchase anytime.

All these cars will be gifted into you garage from day 1 in Forza 4 if they are in your garage in Forza 3 when you do the profile transfer.

So is it ALL the DLC cars I should buy while I still have Forza 3?

I won't be participating in these upcoming spec series.
After certain issues these last couple of months; especially with the touring cars the other night, I'm not exactly brimming with confidence anymore on the track. So I'm gonna take a bit of a break and start all over again in 2012.
In the meantime, I'm just going to build up some cash, collect a few more vehicles etc etc.